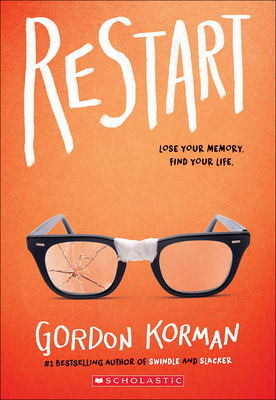 Who wouldn’t jump at the opportunity to start all over again? Chase gets his chance after falling off the roof of his house and amnesia entirely erases his prior life. Snappy writing, lively characters ranging from bullied nerds to bullying jocks, and continuous action propel this story to a truly delightful conclusion.

Why are students backing away from 8th grader Chase Ambrose as he walks down school corridors? Chase has a problem: he doesn't recognize his family or friends since he fell off his roof and developed amnesia. Short chapters alternate between Chase and six classmates' point of view, as readers learn that Chase is a very different person after the fall! He begins to realize the impact he had on classmates' lives before falling, when perhaps he was a bully. Restart is filled with memorable characters, humor, and surprising twists and turns in the story. Can Chase make amends for his previous bad behavior and re-invent himself? Will he make the most of the second chance he has been given?

Chase's memory just went out the window.
Chase doesn't remember falling off the roof. He doesn't remember hitting his head. He doesn't, in fact, remember anything. He wakes up in a hospital room and suddenly has to learn his whole life all over again . . . starting with his own name.
He knows he's Chase. But who is Chase? When he gets back to school, he sees that different kids have very different reactions to his return.
Some kids treat him like a hero. Some kids are clearly afraid of him.
One girl in particular is so angry with him that she pours her frozen yogurt on his head the first chance she gets.
Pretty soon, it's not only a question of who Chase is--it's a question of who he was . . . and who he's going to be.
From the #1 bestselling author of Swindle and Slacker, Restart is the spectacular story of a kid with a messy past who has to figure out what it means to get a clean start.

Gordon Korman is the #1 bestselling author of three books in The 39 Clues series as well as eight books in his Swindle series: Swindle, Zoobreak, Framed, Showoff, Hideout, Jackpot, Unleashed, and Jingle. His other books include This Can't Be Happening at Macdonald Hall! (published when he was fourteen); The Toilet Paper Tigers; Radio Fifth Grade; Slacker; Restart; the trilogies Island, Everest, Dive, Kidnapped, and Titanic; and the series The Hypnotists and On the Run. He lives in New York with his family and can be found on the web at gordonkorman.com.