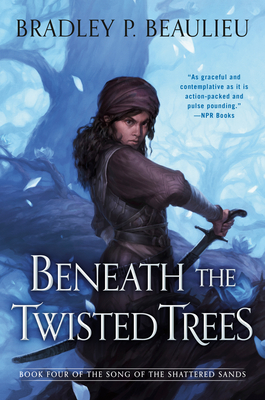 This is book number 4 in the Song of Shattered Sands series.

The fourth book in The Song of Shattered Sands series--an epic fantasy with a desert setting, filled with rich worldbuilding and pulse-pounding action.

When a battle to eradicate the Thirteenth Tribe goes awry, the kingdoms bordering the desert metropolis of Sharakhai see the city as weak and ripe for conquest. Çeda, now leader of the Shieldwives, a band of skilled desert swordswomen, hopes to use the growing chaos to gain freedom for Sehid-Alaz, the ancient, undying king of her people. Freeing him is only the beginning, however. Like all the people of her tribe on that fateful night four centuries earlier, Sehid-Alaz was cursed, turned into an asir, a twisted, miserable creature beholden to the kings of Sharakhai—to truly free her king, Çeda must break the chains that bind him.

As Sharakhai’s enemies close in and the assault on the city begins, Çeda works feverishly to unlock the mysteries of the asirim’s curse. But danger lies everywhere. Enemy forces roam the city; the Blade Maidens close in on her; her own father, one of the kings of Sharakhai, wants Çeda to hang. Worst of all, the gods themselves have begun to take notice of Çeda’s pursuits.

When the combined might of Sharakhai and the desert gods corner the survivors of the Thirteenth Tribe in a mountain fastness, the very place that nearly saw their annihilation centuries ago, Çeda knows the time has come. She was once an elite warrior in service to the kings of Sharakhai. She has been an assassin in dark places. A weapon poised to strike from the shadows. A voice from the darkness, striving to free her people.

Bradley P. Beaulieu fell in love with fantasy from the moment he began reading The Hobbit in third grade. While Bradley earned a degree in computer science and engineering and worked in the information technology field for years, he could never quite shake his desire to explore other worlds. He began writing his first fantasy novel in college. It was a book he later trunked, but it was a start, a thing that proved how much he enjoyed the creation of stories. It made him want to write more. He went on to write The Lays of Anuskaya series as well as The Song of Shattered Sands series. He has published work in the Realms of Fantasy Magazine, Orson Scott Card’s Intergalactic Medicine Show, Writers of the Future 20, and several anthologies. He has won the L. Ron Hubbard Writers of the Future Award and earned a Gemmell Morningstar Award nomination

Praise for The Song of Shattered Sands series:

“Çeda and Emre share a relationship seldom explored in fantasy, one that will be tried to the utmost as similar ideals provoke them to explore different paths. Wise readers will hop on this train now, as the journey promises to be breathtaking.” —Robin Hobb, bestselling author of Fool’s Assassin

"Fantasy and horror, catacombs and sarcophagi, resurrections and revelations: the book has them all, and Beaulieu wraps it up in a package that's as graceful and contemplative as it is action-packed and pulse-pounding." —NPR

"The Song of Shattered Sands series is both gripping and engrossing." —Kirkus Reviews

"Beaulieu's intricate world-building and complex characters are quickly becoming the hallmarks of his writing, and if this opening volume is any indication, [this series] will be one of the next great fantasy epics." —B&N SF&F Blog

"The city of Sharakhai and surrounding area is a living, breathing thing and I revel in it. Beautiful writing, a deep and exciting story and characters you care about." —Shelf Inflicted

"[Beaulieu's] writing is more an immersive experience than anything else; he draws the reader in with such great skill. The first novel was an electrifying start to the series, providing a spectacular introduction to a multi-layered and captivating character living in a world whose layers match her own." —SFF World

"[With Blood Upon the Sand] is an ambitious sequel, larger in scope than its predecessor – and it pulls it off magnificently. It’s intelligent, well drawn and a lot of fun to read – and so I’d recommend it wholeheartedly." —Sci-fi and Fantasy Reviews