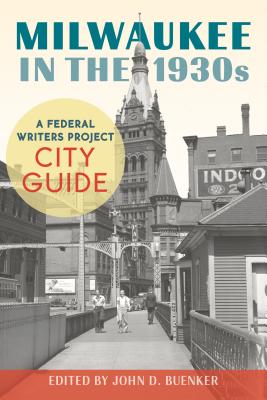 What would it be like to take an intensive tour of Milwaukee as it was during the late 1930s—at the confluence of the Great Depression, the New Deal, and the run-up to World War II? That is precisely what the participants in the Federal Writers Project did while researching their Guide to Milwaukee. The fruits of their labors were ready for publication by 1940, but for a number of reasons the finished product never saw the light of day—until now.

Fortunately, the manuscript has been carefully preserved in the Wisconsin Historical Society Archives

. Seventy-five years after the work’s completion, the Wisconsin Historical Society Press and historian John D. Buenker present this guide—now serving as a time machine, ready to transport readers back to the Milwaukee of the 1930s, neighborhood by neighborhood, building by building. Much more than a nostalgic snapshot, the book examines Milwaukee’s history from its earliest days to 1940.

Buenker’s thoughtful introduction provides historical context, detailing the FWP’s development of this guide, as well as Milwaukee’s political climate leading up to, and during, the 1930s. Next, essays on thirteen "areas," ranging from Civic Center to Bay View, delve deeper into the geography, economy, and culture of old Milwaukee’s neighborhoods, and simulated auto tours take readers to locales still familiar today, exploring the city’s most celebrated landmarks and institutions. With a calendar of annual events and a list of public services and institutions, plus dozens of photographs from the era, Milwaukee in the 1930s provides a unique record of a pre–World War II American city.

John D. Buenker, Ph.D., is professor emeritus of history for the University of Wisconsin–Parkside, where he taught for thirty-three years. As an adjunct professor in the University of Wisconsin–Milwaukee Department of Educational Outreach and a fellow of the Wisconsin Humanities Council, he has taught numerous courses at venues throughout the Milwaukee metropolitan area. @TX-m:John is the author or editor of fifteen books, including volume IV of the Wisconsin Historical Society’s History of Wisconsin: The Progressive Era, 1893–1914. He has published more than 250 book chapters, articles in scholarly journals and reference works, and book reviews. Among them are “‘Neoteching’ Milwaukee: The Cream City’s Emergence as an Industrial Metropolis” in Milwaukee History magazine and “Cream City Politics: A Play in Four Acts” in Perspectives on Milwaukee’s Past. He has received fellowships from the John Simon Guggenheim Foundation, the National Endowment for the Humanities, and the Institute for Research in the Humanities; awards from the state historical societies of New Jersey, Illinois, and Wisconsin; and the Marion G. Ogden Prize of the Milwaukee County Historical Society. In 1991 John was named Wisconsin Professor of the Year by the Carnegie Foundation’s Center for the Advancement and Support of Higher Education and was inducted into the Southeastern Wisconsin Educators’ Hall of Fame.

The book, richly illustrated with period photos and maps created expressly for the guide, is like Alice in Wonderland — if Wonderland were made up of colorful ethnic communities and landmarks now lost to Milwaukee. (Jay Rath, Wisconsingazette.com, May 5, 2016)

The decades this work spent gathering metaphorical dust (I have no doubt the WHS took excellent care of it) have aged it into a wonderful and articulate snapshot of time when Milwaukee was caught beginning to emerge from its old world roots as a modern American metropolis. (Matthew J. Prigge, Shepherd Express, June 28, 2016)