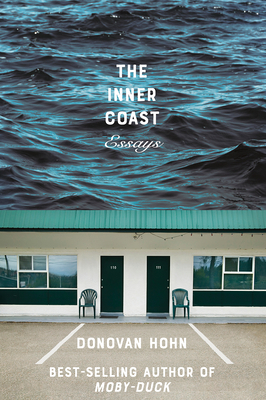 Prize-winning essays on our changing place in the natural world by the best-selling author of Moby-Duck.

Writing in the grand American tradition of Annie Dillard and Barry Lopez, Donovan Hohn is an “adventurous, inquisitive, and brightly illuminating writer” (New York Times). Since the publication of Moby-Duck a decade ago, Hohn has been widely hailed for his prize-winning essays on the borderlands between the natural and the human. The Inner Coast collects ten of his best, many of them originally published in such magazines as the New York Times Magazine and Harper’s, which feature his physical, historical, and emotional journeys through the American landscape.

By turns meditative and comic, adventurous and metaphysical, Hohn writes about the appeal of old tools, the dance between ecology and engineering, the lost art of ice canoeing, and Americans’ complicated love/hate relationship with Thoreau. The Inner Coast marks the return of one of our finest young writers and a stylish exploration of what Guy Davenport called “the geography of the imagination.”

Donovan Hohn, a former editor at GQ and Harper’s Magazine, is the author of The Inner Coast and Moby-Duck and the recipient of an NEA Fellowship, a Knight-Wallace Fellowship, and a Whiting Writer’s Award. He lives in Ann Arbor, Michigan.

The evocative title…reflects something of the nature of Mr. Hohn’s writing, the fertile ground on which his outward explorations meet up with his natural tendency toward intellectual reflection and interiority.
— Heather McAlpin

A collection of perceptive essays…[Hohn] has a charming attraction to quixotic characters.
— Kevin Canfield

Donovan Hohn offers with The Inner Coast a humane view of a world that, as Ernest Hemingway said, is a fine place worth fighting for. And well worth reading about, too.

[The essays] are connected by Hohn’s passion, his intelligence and the evocative style of his prose…Fascinating.
— Keith Taylor

There are echoes of Barry Lopez here, but Hohn's voice—reflective, trenchant, often eloquent—seems all his own…Settle in and savor a keen mind with a laudable moral compass.

With his close sense of connection to nature and knack for quietly moving prose, Hohn reveals himself to be a valuable new name in narrative nonfiction.

Donovan Hohn has a genius for noticing the previously unnoticed and for writing about our environments with careful precision and a patient observer’s love of detail. He is a kind of contemporary archeologist, writing about what surrounds us, and he does so with uncommon grace and quiet eloquence. This is a wonderful book.
— Charles Baxter

Donovan Hohn’s prose is as immaculate and quotable as that of any writer of his generation. And while you always sense his outrage about ecological calamity, and never doubt his moral engagement, his advocacy never feels hectoring. There’s no writer living or dead I would rather read on the reliably distressing topic of environmentalism than Donovan Hohn.
— Tom Bissell

I’ve seldom encountered a writer with a better understanding of both the literary and the journalistic ways and means of telling a true story. Donovan Hohn thinks clearly; he writes with eloquence and force.
— Lewis H. Lapham

Donovan Hohn has a diviner’s capacity to tap into the source and the flow of a story, whether the ‘story’ is narrative or argumentative. His attention to the appearances of things—the false; the true—tunes the reader’s alert-addled animal brain to the meaningful, and the terrible. As the Earth begins to resist us, to remind us that how we’re living will be our undoing, Hohn’s work is that sad, happy thing, glinting in the sand: evidence of what a human mind could do, and what a human heart could yield.
— Wyatt Mason

One of our very best contemporary essayists.
— Rivka Galchen