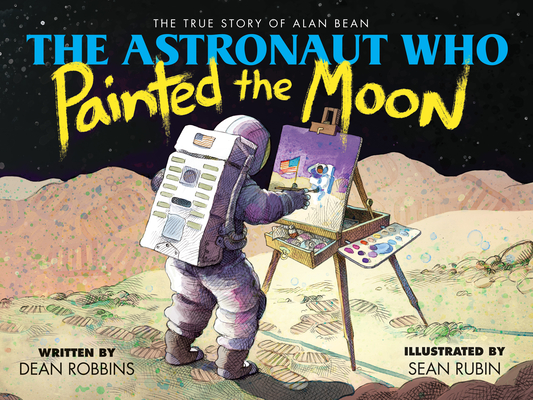 By Dean Robbins, Sean Rubin (Illustrator)
$17.99
On Our Shelves Now

Journey to the moon on the Apollo 12 mission with Alan Bean, the fourth astronaut to walk on the lunar surface and the only artist to paint its beauty firsthand!
As a boy, Alan wanted to fly planes. As a young navy pilot, Alan wished he could paint the view from the cockpit. So he took an art class to learn patterns and forms. But no class could prepare him for the beauty of the lunar surface some 240,000 miles from Earth. In 1969, Alan became the fourth man and first artist on the moon. He took dozens of pictures, but none compared to what he saw through his artistic eyes. When he returned to Earth, he began to paint what he saw. Alan's paintings allowed humanity to experience what it truly felt like to walk on the moon. Journalist and storyteller Dean Robbins's tale of this extraordinary astronaut is masterful, and artist Sean Rubin's illustrations are whimsical and unexpected. With back matter that includes photos of the NASA mission, images of Alan's paintings, and a timeline of lunar space travel, this is one adventure readers won't want to miss!

Dean Robbins is a journalist and the author of the children’s picture books Two Friends: Susan B. Anthony and Frederick Douglass, Margaret and the Moon: How Margaret Hamilton Saved the First Lunar Landing, and Miss Paul and the President: The Creative Campaign for Women’s Right to Vote. His award-winning books have received starred reviews in Publishers Weekly and Kirkus Reviews and been praised in the New York Times and USA Today. Dean grew up idolizing Apollo astronauts and loved working with Alan Bean on The Astronaut Who Painted the Moon. Learn more at deanrobbins.net.

Sean Rubin was born in Brooklyn, New York. An only child, he entertained himself by collecting interesting things, learning about unusual subjects, and by drawing characters from books. Sean graduated from Princeton University, where he met his wife, Lucy. They have two sons and live in Charlottesville, Virginia. Sean's masterful debut, Bolivar, received three starred reviews and was nominated for a 2018 Eisner Award.

* "As the story of 'the only artist ever to see the Moon up close,' this is a standout among titles that blend art and science, and it reflects the best aims of STEAM." -- Booklist, starred review

* "Along with scenes from Bean's youth and short but electrifying time on the moon, [Rubin] incorporates versions of some of Bean's space paintings into glimpses of the artist's studio and a gallery exhibition (where some younger viewers are people of color)... Inspiring fare for readers who, as the author puts it, dream of becoming 'brave astronauts,' 'great artists,' or both." -- Kirkus Reviews, starred review

"Robbins provides an intriguing look into how some math- and science-based experiences can best be communicated with art." -- Publishers Weekly