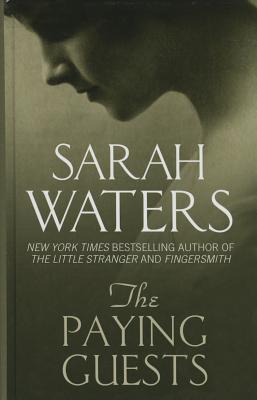 By Sarah Waters
Email or call for price
Out of Print

"World War I has left behind many casualties. Frances Wray and her mother are trying to get by without the men in the family, and anything to live on. They are forced to take in lodgers, much to the shock of the genteel neighborhood, and so refer to them as “paying guests”. The renters are a young married couple, Len and Lilian Barber. Frances is lonely, and so forms a friendship with Lilian, who is also alone as her husband works a great deal. This friendship turns into a passionate affair, which the two women are desperate to keep secret. One momentous night, an action occurs that cannot be undone. The events that ensue snowball into a suspenseful story with an unpredictable ending."

"A meticulously and beautifully constructed novel full of plot twists, character depth, and striking language, The Paying Guests is a compelling page-turner. Set in post-WWI England, the story unfolds with Frances Wrey and her widowed mother deciding to take in lodgers, or the more elegant euphemism ‘paying guests,’ as a source of income. These lodgers, the married couple Leonard and Lilian Barber, are young, modern, and intriguing, especially to the genteel and reserved Frances. The arcane nature of the Barber's marriage is explored, a most curious relationship between Frances and Lilian is cultivated, and a series of shocking secrets kept by all of the characters are unfurled to drive the highly original and imaginative plot of The Paying Guests. An amazingly crafted must-read!"

“At the end of WWI, 26-year-old Frances and her mother find themselves in dire financial circumstances. Both of Frances' brothers died in the war, and now her father's death has left them in debt. Frances and her mother reconfigure their home in a gracious London neighborhood so that they can take in lodgers. From the moment Mr. and Mrs. Barber - the 'paying guests'- arrive, the young couple pulls Frances out of her staid routine, and before long sexual sparks are flying. Waters is a brilliant writer, a master of the hothouse atmosphere and the slow reveal, and her new novel is utterly absorbing.”
— Ellen Sandmeyer, Sandmeyer's Bookstore, Chicago, IL