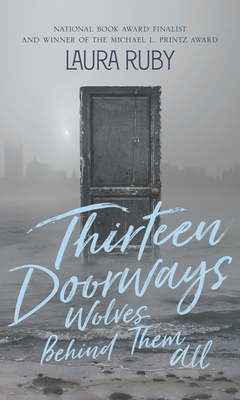 There’s always something to love about a novel narrated by a ghost. Who else can take us so easily through the walls and doorways separating characters, not to mention into their minds and hearts? Like her Printz Award-winning novel Bone Gap, Laura Ruby’s latest book is set in our world, but with the magic touches that make the experience of reading her work anything but ordinary. The setting is World War II era Chicago, and Frankie and Toni have been deposited in an orphanage by a father who cares more for the wishes of his new wife than the happiness of his daughters. The tale of the narrator, the boy she loved, and the racism they faced in their early 20th century society is woven together with Frankie’s struggle to reach beyond the limited possibilities that her own 1940s society had for young women. The characters are nuanced and full of courage, and even the minor characters could have starred in their own books. Bittersweet in many ways Thirteen Doorways, Wolves Behind Them All, forces readers to reflect on the hardship of women who came before us, and would make a great discussion book for both teen and adult book clubs interested in a fiercely feminist read.