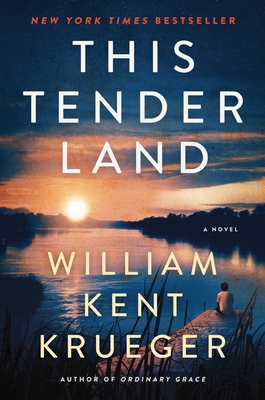 God Is A Tornado. With those desperate words, painted on the water tower for all to see, twelve-year-old Odie and three other children run from the Lincoln Indian Training School in Minnesota, which trains children to give up their culture. Odie and his older brother are the only white kids there, little Emmy Frost is the daughter of a beloved teacher, and Moses is a Sioux boy who lost both his mother and his tongue to an attacker at a very young age. They've seen cruel school leaders preach about a protective God who’s done nothing but deliver them loss. They all have reasons to flee. This is not a children's book, but rather a classic American novel of the Great Depression (1932) and a riveting story of kids trying to find their place in the world. They escape along the rivers in a canoe, headed for a possible home with an aunt in St. Louis, and along the way they meet a fascinating group of characters: the leader of a Healing Crusade, a kidnapper who forces them to work and sees God in "this beautiful, tender land," an adult Sioux who understands Moses, a stranded family among many without jobs, and Odie's first love. The beauty of this novel is in the deeply developed children characters, who got into my heart and have stayed there. Kent Krueger is the type of writer who reaches for wisdom and truth. In this book, he often finds them.

“The work of a master storyteller about the making of a young storyteller, This Tender Land is a coming-of-age novel for the ages. It begins in an isolated Dickensian boarding school in Minnesota during the early years of the Depression, then morphs into the story of four runaways in a canoe à la Huckleberry Finn. On the run from their school headmistress and the law, they encounter other wanderers and escapees from life as they canoe towards St. Louis to find their only known relative and a possible home. Odie, his brother Albert, their schoolmate Mose, and newly orphaned Emmy are unforgettable characters in an unforgiving era. Epic, thrilling, and beautifully written, this is storytelling at its very best.”
— Renee Barker, The Bookstore of Glen Ellyn, Glen Ellyn, IL

“If you liked Where the Crawdads Sing, you’ll love This Tender Land...This story is as big-hearted as they come.” —Parade

A magnificent novel about four orphans on a life-changing odyssey during the Great Depression, from the bestselling author of Ordinary Grace.

1932, Minnesota—the Lincoln School is a pitiless place where hundreds of Native American children, forcibly separated from their parents, are sent to be educated. It is also home to an orphan named Odie O’Banion, a lively boy whose exploits earn him the superintendent’s wrath. Forced to flee, he and his brother Albert, their best friend Mose, and a brokenhearted little girl named Emmy steal away in a canoe, heading for the mighty Mississippi and a place to call their own.

Over the course of one unforgettable summer, these four orphans will journey into the unknown and cross paths with others who are adrift, from struggling farmers and traveling faith healers to displaced families and lost souls of all kinds. With the feel of a modern classic, This Tender Land is an en­thralling, big-hearted epic that shows how the magnificent American landscape connects us all, haunts our dreams, and makes us whole.

William Kent Krueger is the New York Times bestselling author of This Tender Land, Ordinary Grace (winner of the Edgar Award for best novel), as well as eighteen acclaimed books in the Cork O’Connor mystery series, including Desolation Mountain and Sulfur Springs. He lives in the Twin Cities with his family. Learn more at WilliamKentKrueger.com.

Praise for This Tender Land

“If you liked Where the Crawdads Sing, you’ll love This Tender Land by best-selling author William Kent Krueger. This story is as big-hearted as they come.“ —Parade Magazine

“A picaresque tale of adventure during the Great Depression. Part Grapes of Wrath, part Huckleberry Finn, Krueger’s novel is a journey over inner and outer terrain toward wisdom and freedom.” —Minneapolis Star Tribune

“Crafted in exquisitely beautiful prose, this is a story to be treasured – outstanding and unforgettable.” —Historical Novel Review

"If you’re among the millions who raced through Where the Crawdads Sing this year and are looking for another expansive, atmospheric American saga, look to the latest from Krueger." —Entertainment Weekly

"Long, sprawling, and utterly captivating, readers will eat up every delicious word of it.” —New York Journal of Books

"Absorbing and wonderfully-paced, this fictional narrative set against historical truths mesmerizes the reader with its evocations of compassion, courage, and self-discovery. . . THIS TENDER LAND is a gripping, poignant tale swathed in both mythical and mystical overtones."   —Bob Drury, New York Times bestselling author of The Heart of Everything That Is

"More than a simple journey; it is a deeply satisfying odyssey, a quest in search of self and home. Richly imagined and exceptionally well plotted and written, the novel is, most of all, a compelling, often haunting story that will captivate both adult and young adult readers." —Booklist

"Rich with graceful writing and endearing characters...this is a book for the ages." —Denver Post

Praise for Ordinary Grace, winner of the 2014 Edgar Award for Best Novel

"Pitch-perfect...I loved this book.” —Dennis Lehane, New York Times bestselling author of Live by Night and The Given Day

“Krueger aims higher and hits harder with a standalone novel that shares much with his other work....A novel that transforms narrator and reader alike.” —Kirkus Reviews (starred)

“Once in a blue moon a book drops down on your desk that demands to be read. You pick it up and read the first page, and then the second, and you are hooked. Such a book is Ordinary Grace…This is a book that makes the reader feel better just by having been exposed to the delights of the story. It will stay with you for quite some time and you will always remember it with a smile.” —Huffington Post

“The tone is much like To Kill a Mockingbird, with its combination of dread and nostalgia.”—Detroit News