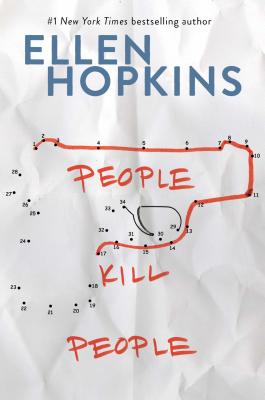 Someone will shoot. And someone will die. Ellen Hopkins infuses the poetry and prose in People Kill People with such emotional depth that all six of her teen characters are beautifully complicated. In some cases, the lines between protagonist and villain are blurred until the reader can see any of them pulling a trigger. A gun is circulating in Tuscon that was used by a husband to kill his wife. One of the six teens bought it next, and each imagines a valid reason to use it. Silas, a white supremacist, believes in his Second Amendment right to open-carry at a peaceful immigration rally. Daniel lets jealousy overtake him, while Noelle is pulling herself out of deep depression, but sometimes slides backwards. Cami deals drugs knowing she shouldn’t bring her toddler into shady neighborhoods, while her husband, Rand, works himself to exhaustion while dreaming of revenge. Grace’s ex stalks her, and her new boyfriend is showing similar tendencies. As for Ashlyn? Life is tough, and the more thrilling she can make it the better. One central message runs through the novel: Yes, people kill people, but guns make it easier.

A gun is sold in the classifieds after killing a spouse, bought by a teenager for needed protection. But which was it? Each has the incentive to pick up a gun, to fire it. Was it Rand or Cami, married teenagers with a young son? Was it Silas or Ashlyn, members of a white supremacist youth organization? Daniel, who fears retaliation because of his race, who possessively clings to Grace, the love of his life? Or Noelle, who lost everything after a devastating accident, and has sunk quietly into depression?

One tense week brings all six people into close contact in a town wrought with political and personal tensions. Someone will fire. And someone will die. But who?

Ellen Hopkins is the #1 New York Times bestselling author of fourteen young adult novels, as well as the adult novels Triangles, Collateral, and Love Lies Beneath. She lives with her family in Carson City, Nevada, where she has founded Ventana Sierra, a nonprofit youth housing and resource initiative. Visit her at EllenHopkins.com and on Facebook, and follow her on Twitter at @EllenHopkinsLit.

“Readers are left guessing which character will kill and which will die.”
— Kirkus