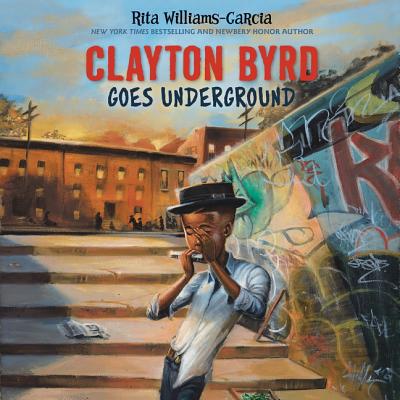 This small book grabs readers' emotions as they begin to know Clayton Byrd. Playing the blues harp (harmonica) with his beloved grandfather, Cool Papa Byrd and the Bluesmen band is the highlight of Clayton's life. When Cool Papa Byrd dies suddenly, Clayton is devastated, and has to face his mother, who seems not to understand Clayton or his grandfather. Running away to find the Bluesmen, Clayton goes underground to the New York subway, where he finds TROUBLE! Written with beautiful rhythmic language, the complex dynamics of a family comes to life. Rita Williams-Garcia has crafted a powerful and exceptional book!

From beloved Newbery Honor winner and three-time Coretta Scott King Award winner Rita Williams-Garcia comes a powerful and heartfelt novel about loss, family, and love that will appeal to fans of Jason Reynolds and Kwame Alexander.

Clayton feels most alive when he's with his grandfather, Cool Papa Byrd, and the band of Bluesmen--he can't wait to join them, just as soon as he has a blues song of his own. But then the unthinkable happens. Cool Papa Byrd dies, and Clayton's mother forbids Clayton from playing the blues. And Clayton knows that's no way to live.

Armed with his grandfather's brown porkpie hat and his harmonica, he runs away from home in search of the Bluesmen, hoping he can join them on the road. But on the journey that takes him through the New York City subways and to Washington Square Park, Clayton learns some things that surprise him.