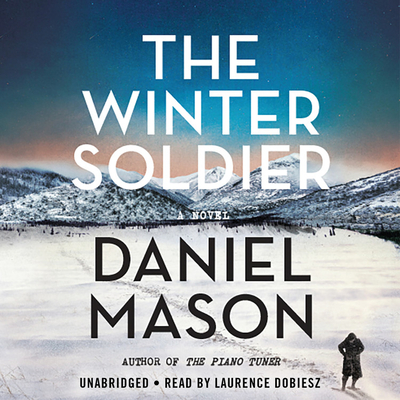 The harshness of World War I's Eastern Front serves as the backdrop for the story of an all-consuming love between a young Austrian medical student assigned to an isolated church-turned-field-hospital in the frozen Carpathian Mountains and a young convent nurse who is the only trained medical person remaining after the doctors have deserted their post. Treating patients with only the most basic of medical equipment and procedures, Lucius and Sister Margarete come to depend on each other and an attraction begins. The arrival of the 'winter soldier,' a mostly catatonic, severely shell-shocked patient without any visible sign of physical trauma changes the focus of the story. In his desperation to treat the patient, Lucius makes a decision that will freeze him into an emotional 'winter' of his own, costing him all that matters most deeply. A well-researched and vividly constructed story, Daniel Mason writes an insightful and moving addition to the literature of the Great War that readers who value historical fiction will long remember. Surely one of my favorite reads of 2018!

By the international bestselling author of The Piano Tuner, a sweeping and unforgettable love story of a young doctor and nurse at a remote field hospital in the First World War.

Vienna, 1914. Lucius is a twenty-two-year-old medical student when World War I explodes across Europe. Enraptured by romantic tales of battlefield surgery, he enlists, expecting a position at a well-organized field hospital. But when he arrives, at a commandeered church tucked away high in a remote valley of the Carpathian Mountains, he finds a freezing outpost ravaged by typhus. The other doctors have fled, and only a single, mysterious nurse named Sister Margarete remains.

But Lucius has never lifted a surgeon's scalpel. And as the war rages across the winter landscape, he finds himself falling in love with the woman from whom he must learn a brutal, makeshift medicine. Then one day, an unconscious soldier is brought in from the snow, his uniform stuffed with strange drawings. He seems beyond rescue, until Lucius makes a fateful decision that will change the lives of doctor, patient, and nurse forever.

From the gilded ballrooms of Imperial Vienna to the frozen forests of the Eastern Front; from hardscrabble operating rooms to battlefields thundering with Cossack cavalry, The Winter Soldier is the story of war and medicine, of family, of finding love in the sweeping tides of history, and finally, of the mistakes we make, and the precious opportunities to atone.