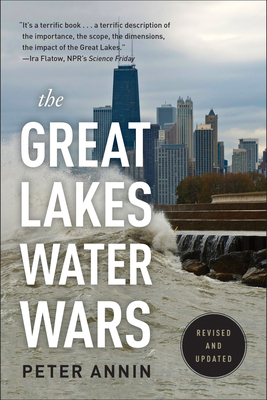 The Great Lakes are the largest system of freshwater lakes in the world and America’s greatest freshwater resource. For over a century they have been the target of controversial diversion schemes designed to sell, send, or ship water to thirsty communities, sometimes far from the source. In part to protect the Great Lakes from overzealous entrepreneurship, the Great Lakes Compact was signed in 2008. Although the Compact fulfills that promise and ensures that Great Lakes water stays within the Basin, some would say it has only shifted the controversy closer to home. Now water diversion controversies of a different kind are some of the most fought-over environmental issues in the region. Will the water wars ever be settled?

Journalist Peter Annin delves deeply into the fraught history of water use in the Great Lakes region and recaps the story of the Chicago River diversion, which reversed the flow of the river, fundamentally transforming the Great Lakes ecosystem. A century later it remains “the poster child of bad behavior in the Great Lakes.” Today, with growing communities and a warming climate, tensions over water use are high, and controversies on the perimeter of the Great Lakes Basin are on the rise. In this new and expanded edition of The Great Lakes Water Wars, Annin shares the stories of New Berlin and Waukesha, two Wisconsin communities straddling the Basin boundary whose recent legal battles have tested the legislative strength of the newly signed Compact. Annin devotes a new chapter to the volatile issue of the invasive Asian carp—a voracious species that reproduces at a disturbing rate—which is transforming the ecology of the river as it makes its way through the Chicago River diversion and ever closer to Lake Michigan.

With three new chapters and significant revisions to existing chapters that bring the story up-to-date over the past decade, this is the definitive behind-the-scenes account of the people and stories behind hard-fought battles to protect this precious resource that makes the region so special for the millions who call it home.

Peter Annin is a veteran conflict and environmental journalist who spent more than a decade reporting on a wide variety of issues for Newsweek. He currently serves as codirector of the Mary Griggs Burke Center for Freshwater Innovation at Northland College in Ashland, Wisconsin.

"For those who love the Great Lakes and seek to understand the politics of water, this book is a must-read. It depicts the threats to the lakes and tells the story of how local leaders and citizens came together to protect the waters from diversion and manage their use for the benefit of future generations."
— Bob Taft, former Governor of Ohio (R); and former Co-Chair of the Council of Great Lakes Governors

"A fast-paced, engaging, and important work of investigative journalism exploring the science, politics, and history behind the critical effort to preserve the Great Lakes. A must-read for all who cherish the home of twenty percent of Earth's fresh surface water and who are committed to its protection."
— Jim Doyle, former Governor of Wisconsin (D); and former Co-Chair of the Council of Great Lakes Governors

"Nobody knows better than Peter Annin the stakes that are in play in the decades-old fight to protect the world's largest freshwater system from outside profiteers. And nobody tells this never-ending story better."
— Dan Egan, award-winning author of "The Death and Life of the Great Lakes"

"If you are one of the many people who care about the Great Lakes, you must read this book. Annin is undisputedly the preeminent journalist writing about the most significant freshwater resource on the planet."
— Todd L. Ambs, Director, Healing Our Waters–Great Lakes Coalition

"The Great Lakes are far more than five arcs of blue on the map in the heart of North America—they are the motivating force behind 150 years of human dreams, schemes, growth, and maneuvering. Peter Annin's Great Lakes Water Wars brings to life the rapscallions, the politicians, the environmentalists, and also brings to life the five lakes themselves. Every tale is a reminder that just when the Great Lakes seem secure, someone is quietly plotting a fresh water grab."
— Charles Fishman, best-selling author of "The Big Thirst"

"Annin's Great Lakes Water Wars is one of those rare books that weaves together current events, policy, science and law, using the most important force of all: great storytelling. You have to force yourself to remember that you're actually reading about policy, science, and law."
— Cameron Davis, Great Lakes "Czar" under the Obama administration

"The Great Lakes have been central to the lives of people in Michigan since before recorded history. We must protect the treasure that these magnificent lakes represent. In this updated edition of The Great Lakes Water Wars, Peter Annin looks at the policy challenges facing our Great Lakes, laying a critical foundation for sound management as we make the decisions today that will impact the Lakes tomorrow and beyond."
— Candice S. Miller, Public Works Commissioner, Macomb County; member, Great Lakes Commission, and former Michigan Congresswoman (R)

"A deeply researched history of interstate and cross-border cooperation addressing the vulnerability of an essential resource. This fascinating read is a thorough analysis in policy making that will be a source of facts and wisdom when Great Lakes diversion projects reemerge."
— Pierre Marc Johnson, former Premier of Québec, international trade negotiator, and adviser to sustainable development organizations

"By capturing the amazing story of our struggles to manage the Great Lakes, Peter Annin demonstrates how water challenges in this region will become more complex and unpredictable than anyone imagined. All who live near and depend on these waters will find new insights into the binational sociopolitical system we must transform to sustain our Great Lakes for future generations."
— Michael Reuter, Midwest Division Director, The Nature Conservancy

"This book oozes power, from the awe-inspiring crash of waves on Lake Superior to the visceral conflict over water diversion fights, the audacity of pumping schemes, and the big idea that the Great Lakes region should have control over its own destiny. Never boring, the writing zooms along at a pleasant pace that allows the reader to absorb the issues and their quest for resolution."
— Tim Eder, program officer, C.S. Mott Foundation, former Executive Director, Great Lakes Commission

"This extensively revised edition of The Great Lakes Water Wars places the Great Lakes in the context of water wars across the globe. Annin's meticulous research and historical backstories mesmerize Great Lakes nerds like me and present a captivating story for general readers. It is a vitally important book by a master storyteller for anybody who relies on freshwater for life. Yes, that's all of us."
— Andy Buchsbaum, vice president, National Wildlife Federation

"Not mere water, the Great Lakes are a spirit, ecology, economy, brand, political movement, and human right that millions will defend like family. Annin deftly draws these competing forces into his narrative of a 'century of water' that alternately points this saturated region toward vibrant renewal or a spiral of conflict. Essential for anyone who believes Great Lakes water is the next grand idea."
— Joel Brammeier, President and CEO, Alliance for the Great Lakes