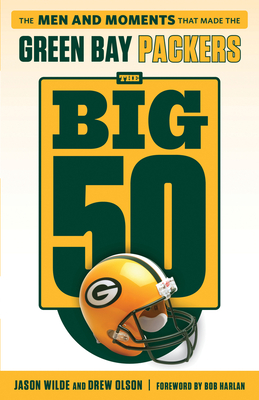 By Drew Olson, Jason Wilde, Bob Harlan (Foreword by)
$16.95
On Our Shelves Now

The Big 50: Green Bay Packers is an amazing look at the fifty men and moments that have made the Packers the Packers. Longtime sportswriters and radio host Drew Olson and Jason Wilde recount the living history of the team, counting down from number fifty to number one. The Big 50: Green Bay Packers brilliantly brings to life the historic franchise’s remarkable story, from Vince Lombar­di and Bart Starr to Brett Favre, Reggie White, Aaron Rodgers, and beyond.

Drew Olson hosts sports radio programming for The Big 920 and The Big 1070 in Wisconsin. He previously worked for twenty years as a reporter for the Milwaukee Journal and Milwaukee Journal Sentinel. Olson is also the co-author If These Walls Could Talk: Milwaukee Brewers with Bill Schroeder.

Jason Wilde is an NFL senior writer for ESPN Wisconsin and an ESPN Radio host. He previously covered the Packers for the Wisconsin State Journal. A two-time NSSA Wisconsin Sportswriter of the year, Wilde has won multiple Associated Press Sports Editors and Wisconsin Newspaper Association Awards for his writing.

Bob Harlan is the former chairman of the board and chief executive officer of the Green Bay Packers. He resides in Green Bay, Wisconsin.