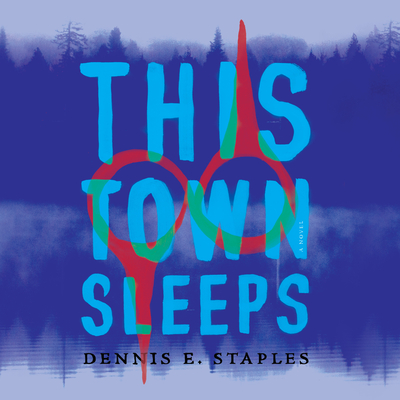 Marion is haunted. By his hometown, hub of a northern Minnesota Ojibwe reservation. By the spirit of a childhood legend. By the boys of his youth, now men afraid of themselves and their desire. By a murder that cracked the foundations of a community as tightknit as family. And Staples opens up the novel to the community’s voices to inform the communal history of Geshig, MN, and remind us that one man’s story is never just his own. But in the end, it’s Marion who must put several spirits to rest if he’s ever going to be at peace with the place he comes from. This Town Sleeps might just be the answer to the question: who will write the great gay Ojibwe gothic novel?

Marion Lafournier left his small Minnesota reservation town. He keeps going back, and he’s not sure why. Maybe walking away from his first boyfriend in Minneapolis at 18 years old could explain it, but it’s more than that. He’s with guys he meets through an app who are hiding in the shadows, but he’s comfortable being out and he wants a relationship. So why keep returning to a place where nothing happens? When he finds a Revenant, a spirit in the form of a dog with a bloody maw, being back starts to look like destiny. The kids always said the dog that died under that schoolyard merry-go-round was still around. Now it seems to be leading him back to the murder of a popular boy, and looking back might be a key to moving forward. Staples gives us a beautifully complex picture of family in its many forms. Ojibwe tradition is blended with modern America and universal humanity. The voices are strong. The stark honesty of Staples’ characters and the grace of his writing make this debut memorable.

“This Town Sleeps, set on an Ojibwe reservation in northern Minnesota, is not an elegiac or idyllic work but rather a direct, unblinking, poetic novel that draws the reader inexorably into the gray areas of the hearts of those in this story. A queer coming-of-age story bound up in a town mystery, this tale of Marion Lafournier, a young gay Ojibwe man, is a compelling debut. Dennis E. Staples is an author whose voice and storytelling will be appreciated in so many ways for years to come.”
— Christine Havens, BookPeople, Austin, TX

Set on a reservation in far northern Minnesota, This Town Sleeps explores the many ways history, culture, landscape, and lineage shape our lives, our understanding of the world we inhabit, and the stories we tell ourselves to make sense of it all. On an Ojibwe reservation called Languille Lake, within the small town of Geshig at the hub of the rez, two men enter into a secret romance. Marion Lafournier, a midtwenties gay Ojibwe man, begins a relationship with his former classmate Shannon, a heavily closeted white man. While Marion is far more open about his sexuality, neither is immune to the realities of the lives of gay men in small towns and closed societies. Then one night, while roaming the dark streets of Geshig, Marion unknowingly brings to life the spirit of a dog from beneath the elementary school playground. The mysterious revenant leads him to the grave of Kayden Kelliher, an Ojibwe basketball star who was murdered at the young age of seventeen and whose presence still lingers in the memories of the townsfolk. While investigating the fallen hero's death, Marion discovers family connections and an old Ojibwe legend that may be the secret to unraveling the mystery he has found himself in.